1. Without separating or peeling the cloves, cut entire head of garlic in half through the “equator” (it’s fine if some cloves become detached). Thinly slice 1 green chile, removing seeds if desired for less heat.
2. If you got whole chicken legs (if not, go to the next step), cover surface of cutting board with a double layer of plastic wrap and place legs skin side up on top (this is to protect your board from any possible contamination; if you have a cutting board that you use for raw meat, use that). You’re going to split the legs into thighs and drumsticks. Working one leg at at time, wiggle drumstick so you can see the joint connecting the thigh and drumstick. Slice down with your knife crosswise between the two, aiming for the joint, until you hit bone. Grasp leg with thigh in one hand and drumstick in the other and break the joint, then cut the rest of the way through with your knife. Repeat with remaining legs.
3. Heat 1 Tbsp. vegetable oil in a large Dutch oven over medium. Add chicken skin side down and cook, lifting pieces with tongs once or twice toward the end to let hot fat flow underneath, until fat is rendered and skin is crisp and golden brown, 7–10 minutes. Transfer skin side up to a plate. Because drumsticks are covered entirely in skin, you can brown both sides, but it’s not necessary.
4. Add ¾ cup vinegar, ¾ cup soy sauce, 1 Tbsp. brown sugar, 5 bay leaves, and reserved garlic and sliced chile to Dutch oven. Bring to a simmer, then reduce heat to low, stirring to dissolve sugar. Season generously with pepper.
5. Return chicken to pot skin side up. Cover and cook chicken very gently, adjusting heat to maintain a bare simmer and turning pieces once, until meat is very tender and pulling away from bone (but not so tender that it’s falling apart), 35–40 minutes.
6. While chicken is simmering, cook 1 cup rice in medium pot according to package directions.
7. Transfer chicken to a clean plate. Increase heat to medium-high and boil braising liquid, shaking pot often, until liquid has formed a rich sauce thick enough to coat the back of a spoon, about 5 minutes. Remove pot from heat and return chicken to pot, turning to coat in sauce.
8. Serve chicken and sauce over rice. Thinly slice remaining chile and scatter over, then season with more pepper.

Mine did not come out salty like everyone else is saying (I used the low-sodium soy sauce) but mine was SO VINEGARY.

Mine did not come out salty like everyone else is saying (I used Low-Sodium soy sauce) but mine was SO VINEGARY. 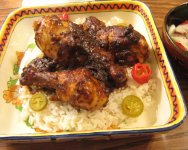 Site Supporter
That looks really good. What is the hot factor without the serrano/jalapenos?

Cooksie said:
That looks really good. What is the hot factor without the serrano/jalapenos?
Click to expand...