I was at the grocer today and picked up a magazine that just released its premiere issue called 'Fermenetation.'

If anyone is interested in the topic it is a great read. There are some ads in there for manufacturers of fermentation gear and what not. Many articles and recipes. It's recommended. 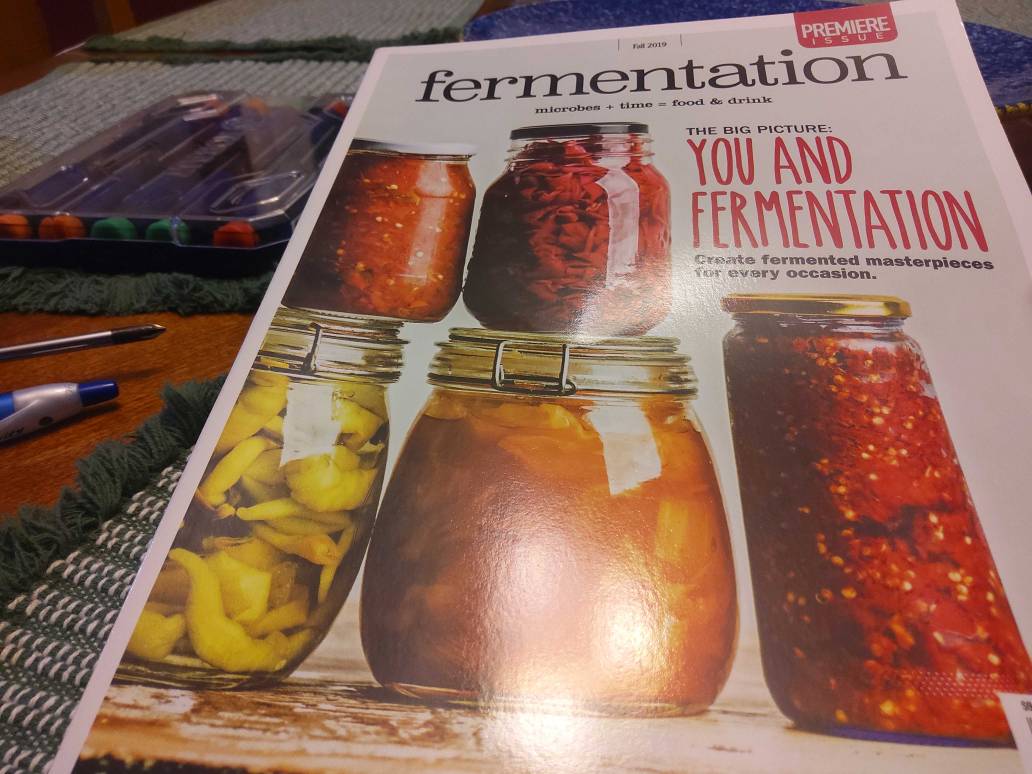 Well I kicked off my first fermentation project by making sauerkraut. It wasn't really on my mind but I stumbled upon a funny video

and it really surprised me how simple it was. So i found a two pack of one gallon fementation jars on amazon (with the air control valve thingie for each). Went to the market today and got three good cabbage heads. Took just abit more than two heads to accomplish. Took six lbs of chopped cabbage and three of my largest bowls to begin kneading and punching. At the end it had reduced down to one bowl. I omitted the galic because it left my head. So it's sitting there on my side counter in the kitchen waiting two weeks. I think I will look at goodwill stores in my area for used jars to store the outcome.

Now, I have a buddy who makes brats. It'll be a great meal to combine the two.

My next project will be to mix regular cabbage with red cabbage and some thinly sliced bell peppers. Its going to be fun learning this aspect of home cooking. And I'm looking forward to complementing my diet with more good bacteria.

Anyone ever throw rosemary into their kraut? Would that essence balance well with the kraut? Mewonders. 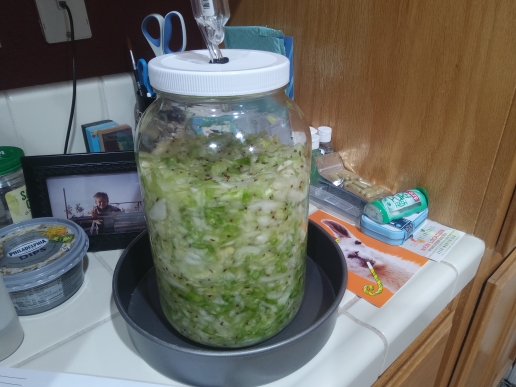 Site Supporter
I do small batch fermentation, since it's just 2 of us, so don't need the special jars.

I've only used juniper berries and/or caraway seeds for kraut. I also had an aha moment while cracking the caraway seeds a couple of batches ago. Didn't feel like messing up and having to clean spice grinder, so I used a plastic bag and the meat pounder flat side to crack them. While doing so, realized I could use the end of the mallet to rock back and forth to work the salt into the cabbage. Saved my arthritic hands LOTS of pain and did an excellent job!

I'll make half sour pickles on occasion, but we like the ones the grocery has in the cold section so rarely make them. I also make pickled beets and preserved lemons from time to time. Forgot giardiniera when I'm going to make Muffalettas. 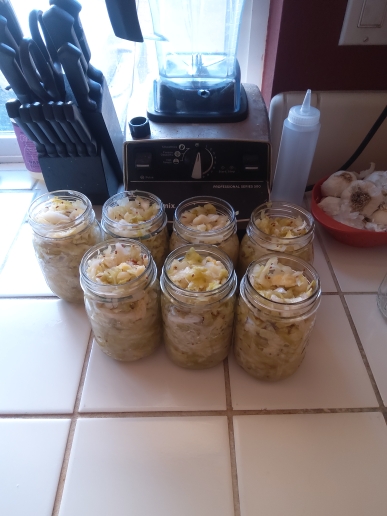 I posted a wanted ad on craigslist hoping to get a piece of scobi from a nearby kombucha maker and thirty minutes later received a response. i opened up only to see a very unwelcome junk shot from some random dude. glad i wasn't at a cafe when i opened it up that would'e been embarassing.

this was my first time posting on craigslist and i'm beginning to think it a complete waste of time.

Staff member
Gold Site Supporter
Thanks for the update on your slaw and great photos, calcmandan!