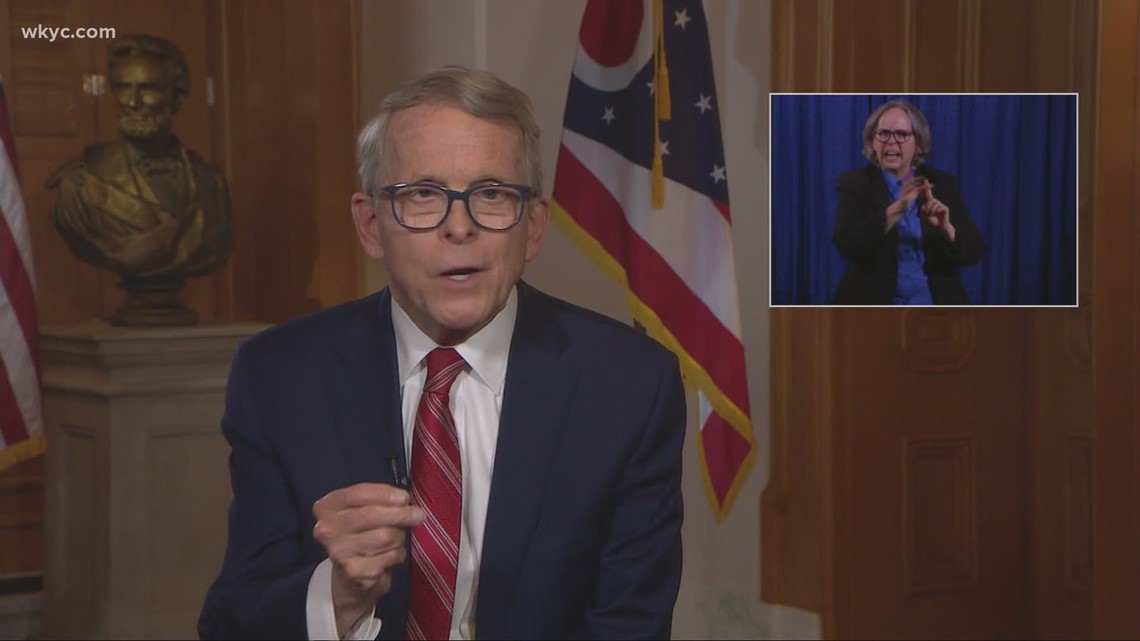 DeWine announced that the state will be holding a weekly lottery offering prizes of up to $1 million for adults who have received at least one dose of the vaccine.

OHIO — Today, Wednesday, June 2, serves as a milestone on the hardship road that is the COVID-19 pandemic. At midnight on Tuesday, the Ohio Department of Health and Governor Mike DeWine’s administration lifted all orders pertaining to masks, social distancing, and capacity limits, indoors and out.
During a recent address, DeWine lauded the efforts of all Ohioans, saying residents showed “grit, determination, and such great compassion” in the face of the pandemic, and the efforts on the part of the ODH and the State to curb its spread. He then announced the lifting of orders supporters deemed necessary, and opponents — including many members of Ohio’s General Assembly — described as draconian.
“The tide of this pandemic is finally turning in our favor,” DeWine said. “It’s time to end the health orders. It’s been a year. You’ve followed the protocols. You’ve done what we’ve asked you to do. You’ve bravely fought this virus.”
While the orders are now lifted in general, some restrictions remain in place. Long term care and assisted living facilities are still subject to pared down mandates. Additionally, Ohio businesses and schools may still require masks for some, if not all.
A key component to when and how private and public businesses and agencies might implement orders of their own is what medical professionals have described as the single greatest weapon against the virus: vaccination.
That scientific belief wasn’t lost on DeWine. In announcing the lifting of the orders, he emphasized the need for vaccinations, a sentiment Putnam County Health Commissioner Kim Rieman echoed.
“The mandates are lifted, the social distancing and the masking mandate,” she said on Tuesday. “However, CDC guidance is still that unvaccinated people should wear a mask. People need to evaluate who they’re going to be around, and their own vaccination status, and make the decision that best protects them and their loved ones.”
When the vaccine first arrived in Putnam County just before Christmas of last year, Rieman said county residents’ lined up for inoculation, creating wait lists, and the need for mass vaccination clinics. Now, she said, those numbers have dwindled. Once in the top five in the State for percentage of population vaccinated, Putnam County has since fallen into the bottom third.
“Putnam County, like a lot of other counties in Ohio, is seeing a slow down,” Rieman said. “We are really wanting to keep up what we were doing, because we know there are a lot of individuals out there who could receive the vaccine who are just choosing not to.”
Although clearly an advocate for vaccination, Rieman said there are purely selfish reasons why everyone should pursue vaccination.
” One of the things we want to make clear, even though the mask mandate is lifted — along with social distancing and occupancy limits — the thing that does still stand is if you are in contact with a confirmed case of COVID, the quarantine will still be implemented. We don’t want people to think there’s no need to do this anymore, and that there’s no need to get vaccinated. There still is a very important need to get vaccinated. If someone comes in contact with a confirmed case, they will still have to quarantine for those ten days. Unless they’re vaccinated. If they are vaccinated, they can continue doing what they’ve been doing, unless they show symptoms.”
Rieman asserted the quarantine mandate is in effect for all unvaccinated individuals, even those who have already contracted the virus.
“Even though we’ve been living with this for a year, this is still a relatively new virus,” Rieman said. “We just don’t know enough at this point. We can’t take chances.”

Gold Site Supporter
We now have 14 residents testing positive for covid.
After all this time.
They've all been fully vaccinated.
We now have a covid ward set up on our 300 wing.
I'll be there on Saturday working.
Makes you wonder if this vaccine is even working for some.
Apparently it isn't.

Sass Muffin said:
We now have 14 residents testing positive for covid.
After all this time.
They've all been fully vaccinated.
We now have a covid ward set up on our 300 wing.
I'll be there on Saturday working.
Makes you wonder if this vaccine is even working for some.
Apparently it isn't.
Click to expand...

Not scary at all.
Just wondering how this happened but I think I know how it happened.
We let our guard down too soon, and the vaccine doesn't work for every person.
Then we get admissions.. yeah that's brilliant.

Amelia tested positive for Covid. They were to go to Portland this weekend so that is off. I haven’t heard if she is actually sick.

one of our neighbors recently died - he was 49 years old.

Peter said she is chipper this morning.

Johnny West said:
Peter said she is chipper this morning.

Maddie and Elaina both had it months ago.
You know, like a mild head cold.

That was the same with me when I tested positive.

Now Peter has tested positive, says he feels like he did day after he had his shots.

Gold Site Supporter
My Cousin Shirley in Hanover Pa. got infected with it at the beginning of
December..... She was hospitalized until the first week of January, and was still miserable for a couple
of weeks after that...... Last week of April, she caught it again...... no hospital this time, as
she had some immunity built up from the first experience....... but it drained her quickly,
and an "infusion" treatment didn't really do much to reduce the Symptoms.... now, her
hair is thinning out .......but she has lost the congestion, and is feeling stronger......... Shirley is 79 ........