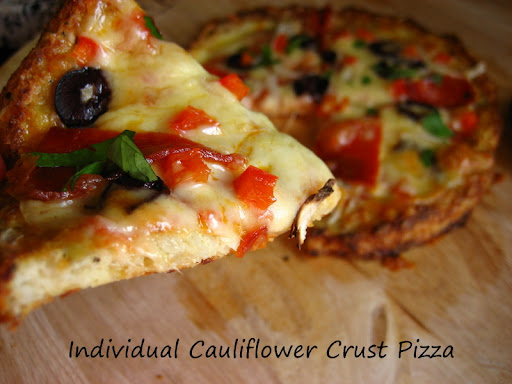 
1. Bring a pot of water to a rolling boil and add a pinch of salt.

2. In the meantime, cut cauliflower in florets and place florets in a food processor bowl. Pulse raw cauliflower florets until you achieve a rice-like texture.

3. Add the rice-like cauliflower to the boiling water. Cook for 3-4 minutes.... you don't want to over cook it and get mushy.

4. Get a large colander and place a clean, thin dish cloth inside.

5. When the cauliflower "rice" has cooked a bit, pour the hot water and cauliflower over the dish cloth. Allow to drain and cool somewhat.

6. Twist cloth around the cauliflower rice to remove as much of the liquid as possible... mine was still hot to handle with bare hands, so I used my tongs. When you think there's no more liquid, squeeze again. This is essential... and key to a non-soggy crust! 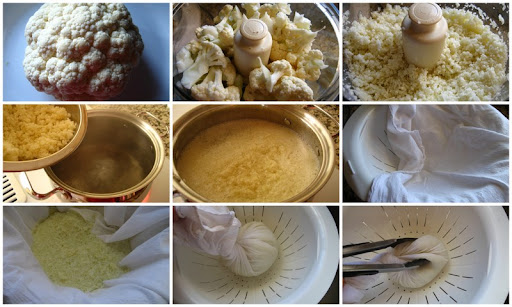 7. In a large bowl, mix the strained rice, egg, mozzarella cheese, and spices.... season with a bit of salt and pepper. Go light on the salt as the toppings can get to be salty later on. Divide mixture in 2.

8. Place about 1 TBS of the shredded Parmesan on the left side of the baking sheet( that has been lined with parchment paper and oiled lightly)... sprinkling the cheese to form a rough circle about 6 inch in diameter. Add another 1 TBS of shredded Parmesan cheese on the right side of the baking sheet and repeat another circle of Parmesan cheese. You are basically making the base for 2 cauliflower crusts.... it will help with crisping up the crust and give it extra flavor.

9. Add half the mixture of cauliflower on top of one of the Parmesan cheese circles. Using your hands, spread out the cauliflower mixture to form a round circle... roughly 6 inches in diameter and 1/2 inch thick. You can form a "lip around the crust, if you like... really, not necessary. Sprinkle crust with additional 1 TBS Parmesan cheese on top of crust. Repeat with the second half. 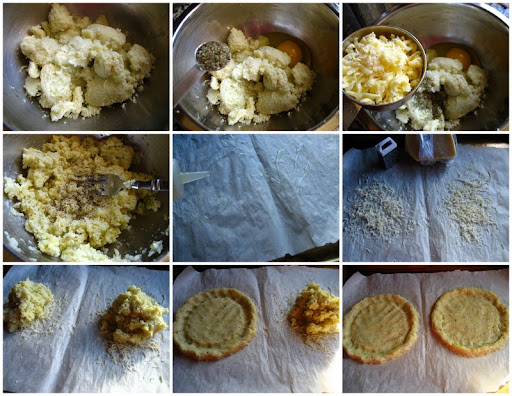 10. Place crust to bake in a preheated oven for about 40 minutes.... or until nicely browned.

11. Remove crust, add sauce and toppings of choice. Bake for another 10 minutes or so... or until cheese is bubbly. 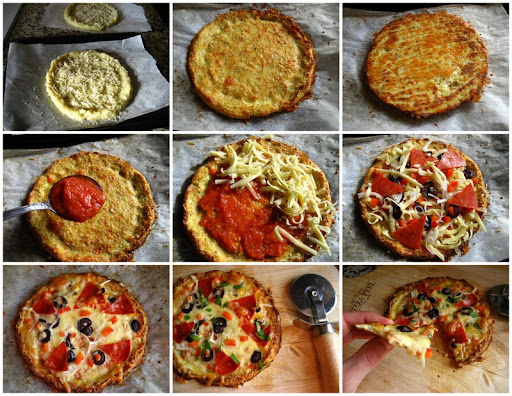 I was thinking that this might be interesting to try to others: pizza with no flour crust.

Need to be creative?

When I have some time on my hands, I'd like to give it a try.